"Product of the Year" - Inside Dental Technology 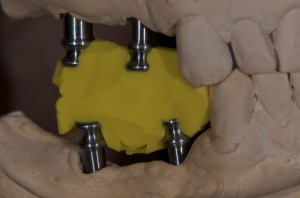 As a dental technician for over forty years, I took accurate occlusion as a do- or-die part of my job. We made bite records taken over preparations mandatory on each case and I always set the casts myself. Each bite record was cut back far enough on the facial to make certain that the opposing model and prep model fit the bite matrix perfectly. There was no give in this visual edict and mounted cases always need light equilibration for vertical certainty. Good impressions, accurate registrations over preps and lab commitment to precise bite setting, proved to be a bullet proof system for accurate occlusion. Most of our single crowns were seated in ten minutes and the bridges weren’t far behind. The beauty and form of a restoration will never matter to any dentist if the occlusion is wrong.

The 1980’s arrived and with it came what is known today as the largest growth opportunity in all of dentistry. Dental implants! By now we worked for very demanding high profile clients that rightfully believed accurate occlusion was a given with our laboratory service. Well, it used to be that way when we could rely on the bite record over the preparation, but implants don’t have preparations and we were left to guess at setting the casts! Our clients did try hard to help us with occlusal communication on the implant cases and we attempted everything short of witchcraft

, but still we had far more occlusal adjusting and remakes on our implant work. One morning, a large implant bridge was returned to the lab for a third occlusal adjustment, but this time it needed to be remade. Our client took a new bite record over the old bridge to insure occlusal accuracy on the remake, so the cost involved in this remake bite record was mind numbing and certainly a disappointment to the patient as well! Unfortunately, this had become a familiar defeat and words cannot describe the frustration I felt at that moment. Years of this frustration had culminated in my mind and as my rage began to escalate, I experienced what I could only describe as a true epiphany. Without contemplation, I grabbed some wax wire, shoved it into the implant, cut it to the needed vertical and waxed in an undercut. In the next moment I was rushing over to two of my colleagues nearly shouting, “Why don’t the implant companies make something like this with a few threads for rigidity so the dentist could take a bite over it?” Their retort back to me was “Why don’t you?" “Why not?” I mused. Certainly it was a great idea and with some effort, I might create the perfect mousetrap, or in this case, the only mousetrap. After several days of contemplation, I succumbed to the fear of failure and sheepishly assumed or hoped that someone else would remove this sharp thorn from the feet of dental implants.

A few more years had passed and our implant occlusion problems had increased proportionately to the amount of implant cases we did, so the only change in the occlusion was even more problems. After a few more personal meltdowns in early 1998, I then designed what we would call a surrogate preparation or Implant Bite Post. This time the design included threads to rigidly attach the Bite Post to the implant. My hopes were that this added feature and new design would once again return us to the time proven method of bite records over preparations. We then waded in to the discovery process of what the patent costs might be, the effort of gaining FDA approval and added in the start up and manufacturing costs. After careful consideration and reality based financial accounting, we decided that the risks were great and the idea was so simple that every implant company probably had a bite post on their drawing board anyway. Though I held deep conviction that this Bite Post idea was the perfect solution, I ultimately gave in to uncertainty and fiscal fear. Blinked again!

In 2010, dental implants had continued to gain market share and the upgrades in technology were now a monthly occurrence. Still the industry struggled with occlusion on implant work and nothing about surrogate preps or any other solution had magically arrived from an implant company drawing board. One morning in 2010, I was feeling the pressure from my technical manager, who kept saying, “We need to get that Bite Post project done.” Timing is everything, and that very morning I made the commitment to go for it at all costs. No blinking! Patent issues, attorneys, FDA, prototypes and mind numbing expenses can’t really describe the effort it takes to bring an idea from nothing to the market place. This small Bite Post Company takes great pride in our service and we feel validated that so many dentists and labs use our product. We have witnessed implant occlusal success from the very beginning and we can say with certainty that using Implant Bite Posts will ultimately save dentists and laboratories valuable time and money. Our Bite Posts were developed with experience, knowledge and passion, so you have our solemn promise that this easy to use solution will really work for you!